This summer, during testing of new sonar equipment, the Norwegian Geological Survey (NGU) discovered an anomaly on the seabed. The shape of the anomaly on the sonar images suggested that they had found a small aircraft. Neither the Norwegian University of Science and Technology or the Norwegian Aviation Museum had any plane wrecks on these coordinates in their records. Blueye was asked to help NGU with our underwater drones to document and identify the wreck.

On 14th of October, we took two underwater drones down to the wreck, and could film and photograph what turned out to be the an Arado AR 196 aircraft from World War 2.

Locating the wreck was easy, as NGU had provided us with accurate GPS coordinates. We confirmed the location with the echo sounder on our boat before anchoring. Once we got the drones down on the wreck, NGUs suspicion of a small aircraft was quickly confirmed. The body of the aircraft was intact, with wings, engine and propeller still attached. The skeleton of the plane was exposed, and the canvas that had once covered the body had corroded away after more than 70 years on the seabed.

We spent close to two hours exploring and documenting the wreck from all angles with two underwater drones, trying to cover as many details as possible and to ensure we had enough images to use for identifying the wreck.

After completing the dive, the Blueye team was super excited about the new find, and eager to identify the aircraft and its history. Based on the size of the aircraft the alternatives were quickly narrowed down, and by comparing images of the wreck with different airplanes, we concluded that this was most likely a German AR 196.

Further research led us to a document about the activity of Luftwaffe (only available in Norwegian) in the Trondheim region, written by local history enthusiast Hans Olav Løkken. In this document, Hans Olav writes that allied forces, during the post-war cleanup, dragged three Arado AR 196 out on the fjord and sunk them on the 11. September 1945.

In the digitalized newspaper archives hosted by the National Library, we found short note in the local newsletter Adresseavisen mentioning this event on the 13th of September 1945:

With the identity and faith of the aircraft uncovered, some questions still remains:

I'm sure this will not be the last time we dive the Arado AR 196 in the Trondheim fjord... 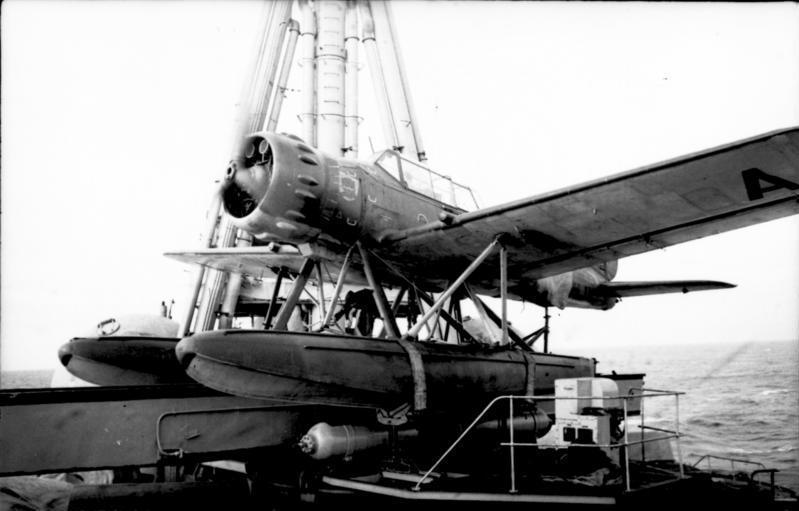 The Arado Ar 196 was a shipboard reconnaissance low-wing monoplane aircraft built by the German firm of Arado starting in 1936. The next year it was selected as the winner of a design contest and became the standard aircraft of the Kriegsmarine (German navy) throughout World War II. The aircraft was catapulted into the air from the vessel, and hoisted back on-board after landing on sea. The two large German battleships Tirpitz and Bismarck carried four AR 196 aircrafts each.