Exploring the cannons of Russian cargo ship from 1760

Jedinorog, Russian for The Unicorn, was a sail ship build in 1758 at Solombalskaya wharf in Arkhangelsk. The ship measured 40 m in length, and was owned by empress Elizabeth of Russia. In 1760, Captain Vasilij Bulgakov and his crew of 130 men were sailing north along the Norwegian coast, carrying cargo consisting of cannons, ropes, anchors and led. During a violent storm, the ship lost its anchoring and drifted ashore on the 16th of October 1760. Only 11 crew members survived.

Over the years, more than hundred cannons have been recovered, but several large cannons can still be found on the seabed. This offers us a unique opportunity to travel back 250 years in history.

During a company retreat to the family cabin of Blueye CEO, Erik on Sæbuøya, we used the opportunity to explore the wreck site of Jedinorog. Over the years, the wreck has been explored at multiple occasions. As early as 1877, more than 100 cannons where recovered. In 1961, the wreck was rediscovered by recreational scuba divers, and throughout the 60s and 70s, cannons and other remains of the ship have been brought up both legally and illegally.

In August 1994, a team from the Norwegian University of Technology and Science conducted a marine archaeological survey of the site. A total of 52 dives where conducted, and 17 cannons and 27 other artifacts from the ship where mapped and documented.

Finding the cannons was fairly easy as they are resting at the bottom of a narrow canyon, starting above the surface and continuing into the deep. We had a total of four drones in the water, and I joined in with scuba equipment to photograph the drones in action. The still photos in this post are taken on a Olympus OM-D E-M5 II camera, while the video is shot using the underwater drones. After locating the underwater canyon we followed it down to about 16-17m where we discovered the first cannons. The cannons had a beautiful red color due to the rusty leayer on top. This also made them very visible because nothing could grow on them.

Being able to observe history first hand like this is quite a unique experience. The cannons, despite having spent more than 250 years under water, are still an impressive sight. The largest measures about 325cm in length and 63cm in diameter. The coolest part was that there were so many laying around, so we could really fly around and hunt for new relics further down the canyon.

The background for the the marine archaeological survey was the gas pipeline Statoil was building between Haltenbanken and Tjeldbergodden. They needed to document if the pipeline would interfer with the historical wreck. During the shallow water surveys conducted by scuba divers only cannons and small artifacts where found, but not the actuall wreck. ROVs where deployed at multiple occasions over the next years to look for larger remains of the ship at greater depths. The slope going down from 30m to about 260m where surveyed, but only fragments of wood, iron and led were found. It was concluded that no large wreck parts were to be found.

The marine archaeological work is well documented in the book Ships from the Depths: Deepwater Archaeology written by Fredrik Søreide at NTNU (available as e-book).

It is facinating how technology has evolved. We can now visit the same site 20 years later with a a small, userfriendly vehicle controllable from your own device.

Note: All ship wrecks older than 100 years old are automatically protected by the cultural heritage act. It is not allowed to retrieve objects, and scuba (and underwater drone/ROV operators) should act with caution to not damage the wreck 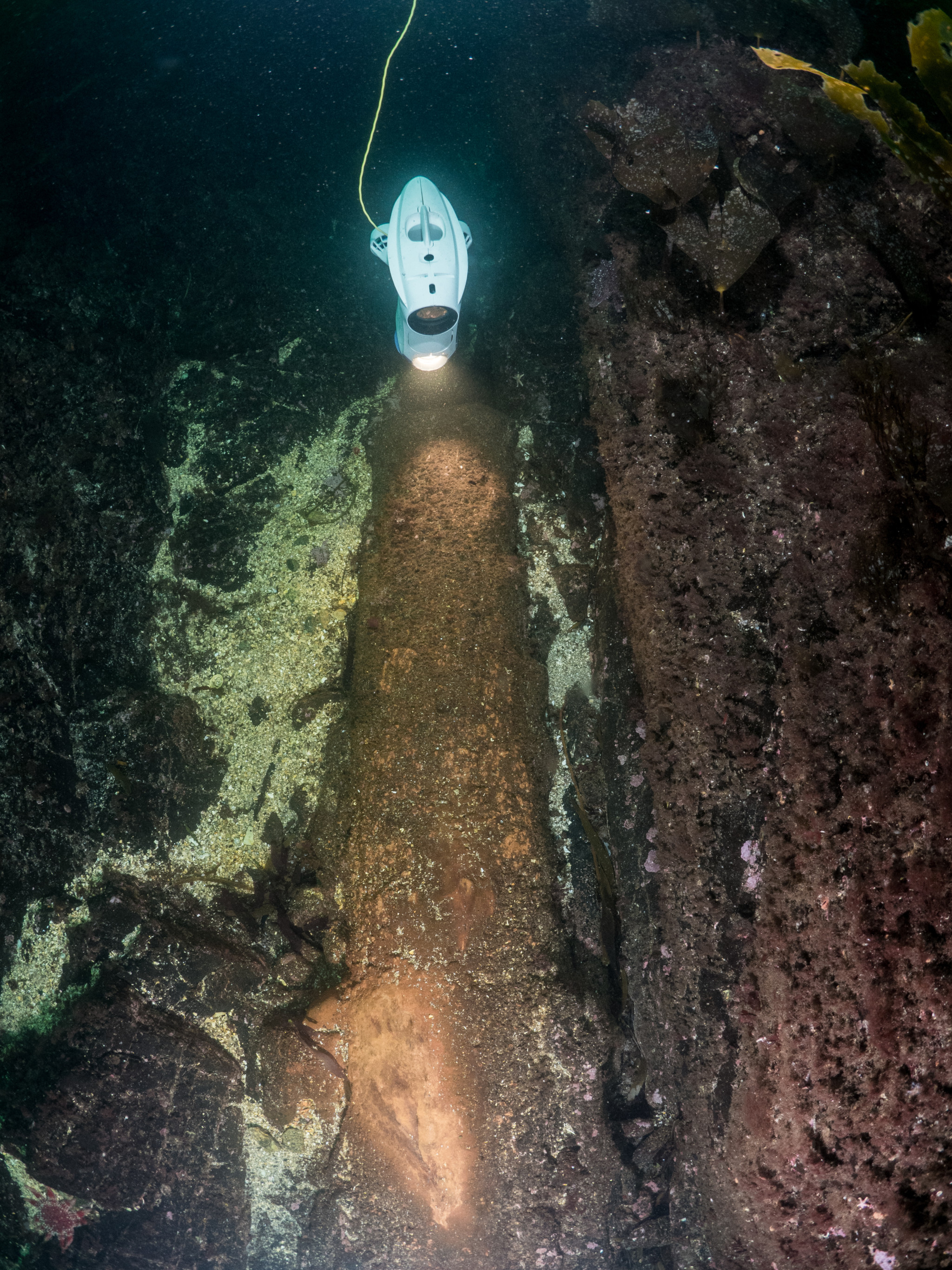