Last week I, Andreas Viggen from Blueye Robotics, was out on a drilling rig called Maersk Integrator in the North Sea just west of Stavanger. Here, Maersk Integrator has been commissioned to install two new wells on Ivar Aasen. In collaboration with Aker BP, we were to test the use of the Blueye drone from the jackup rig during the actual drilling operation. Maersk Integrator is a jackup rig that is installed next to the Ivar Aasen platform, so that the cantilever with the drill tower can be pushed out over the platform. In this way, Ivar Aasen does not have to have its own drill tower.

Preparations before the operation

The task was mainly to observe the "conductor guides" when the drill string and conductor pipes were to be lowered through the jacket structure of Ivar Aasen. This is necessary to prevent damage to the equipment, which in turn can lead to major delays in the project. The assignment is also part of Aker BP's incentive to cut costs by possibly being able to reduce the use of work-class ROVs in simple marine operations. 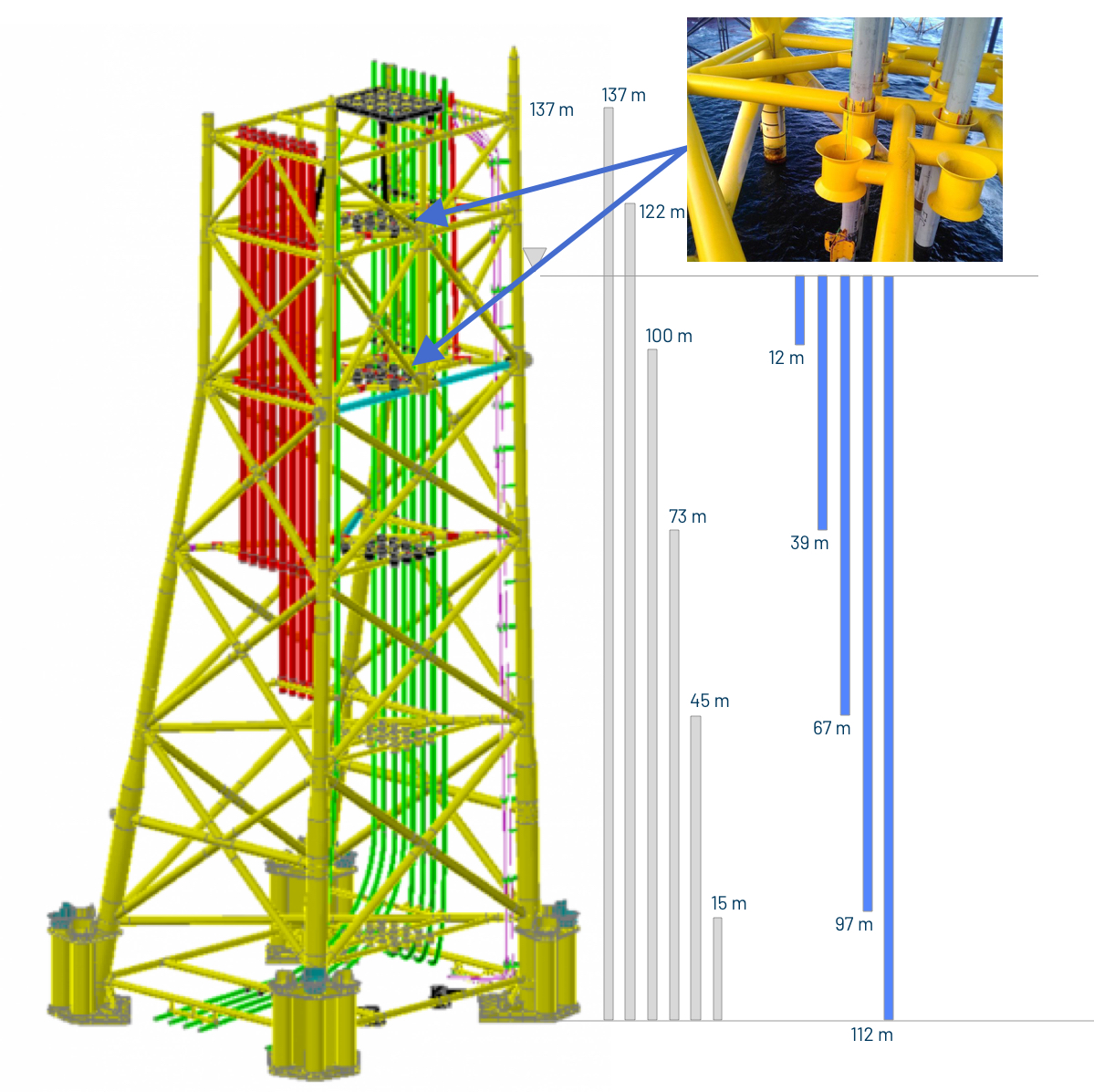 The weather was carefully observed with a forecast of significant wave height and wind speeds. With a wind speed of about 10-15 m/s and waves of 2-3 Hs, we decided to try to launch the Blueye drone. In order for it to be safe to lower it down over the railing, a simple launching rig was made consisting of a small anchor roll mounted on a cable rail which in turn was mounted to the railing. 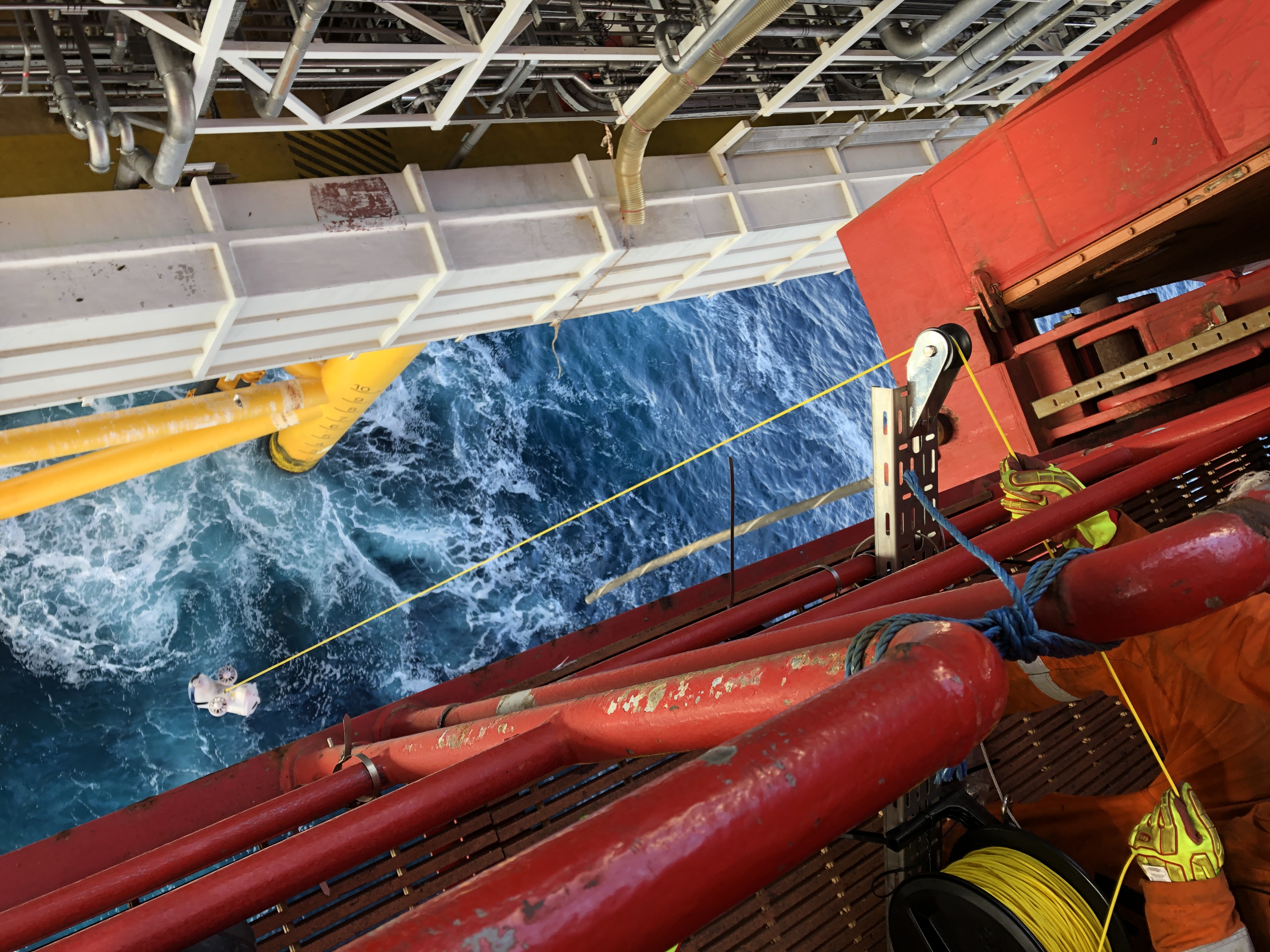 The drone was lowered 38 meters down from the Texas deck before entering the water. Although we had previously feared that the underwater vehilcle would be like a pendulum, it was completely unproblematic to lower it down to the waves. When the mini-ROV hit the surface, all you had to do was to release enough on the tether, hold down the boost button, and fly over to Ivar Aasen's structure through the waves that broke around the truss. With auto-heading, it was neither a problem to keep the direction even in this wave foam. When we came down to a depth of 12-15 meters, it calmed down considerably and we quickly spotted the first level with conductor guides. 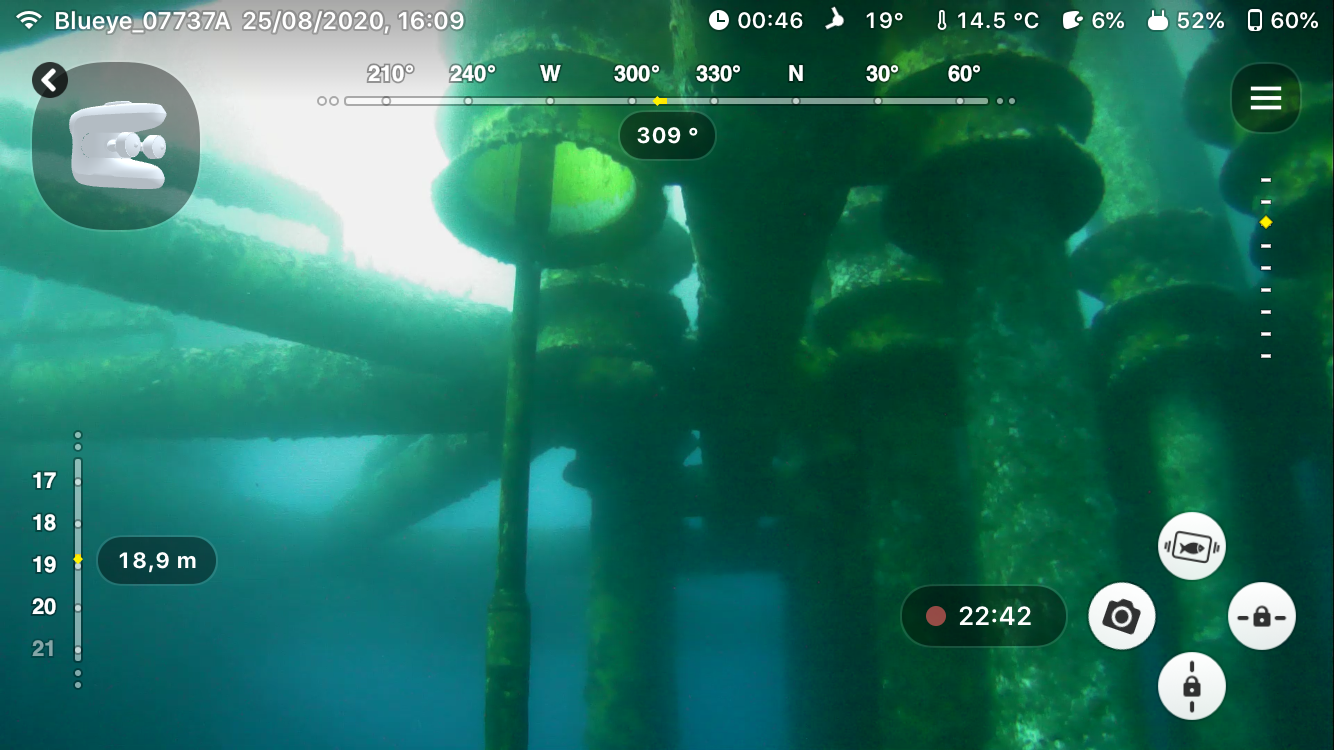 The water was crystal clear with good daylight that made it easy for us to orientate ourselves. As we got further down, it got darker and murkier, but that also went just fine with the drone's powerful light, as long as we kept parts of the structure in view. As there was a lot of current and power from the waves, the battery was used up relatively quickly, so we ended up with a diving time of about 75 min after being down on the lower conductor guide at 100 m depth. You could easily see the drill string rotate as we drove up to the surface again. Finally, we pulled in the slack of the tether before lifting the drone up by hand over the anchor roll.

There was also another ROV which was also quite small, but still 6 times heavier than the Blueye mini-ROV. They had rigged a container on deck with a crew of four men who went 12-hour shifts. The guys on the dayshift had extensive experience as an ROV pilots in the North Sea in companies such as IKM Subsea, Oceaneering. Their craft was a Saab Seaeye Falcon equipped with both grippers and multi-beam sonar. In addition, a PH sniffer (mounted in front) was installed when we were to verify that the cement had reached the very top around the conductor in the hole. 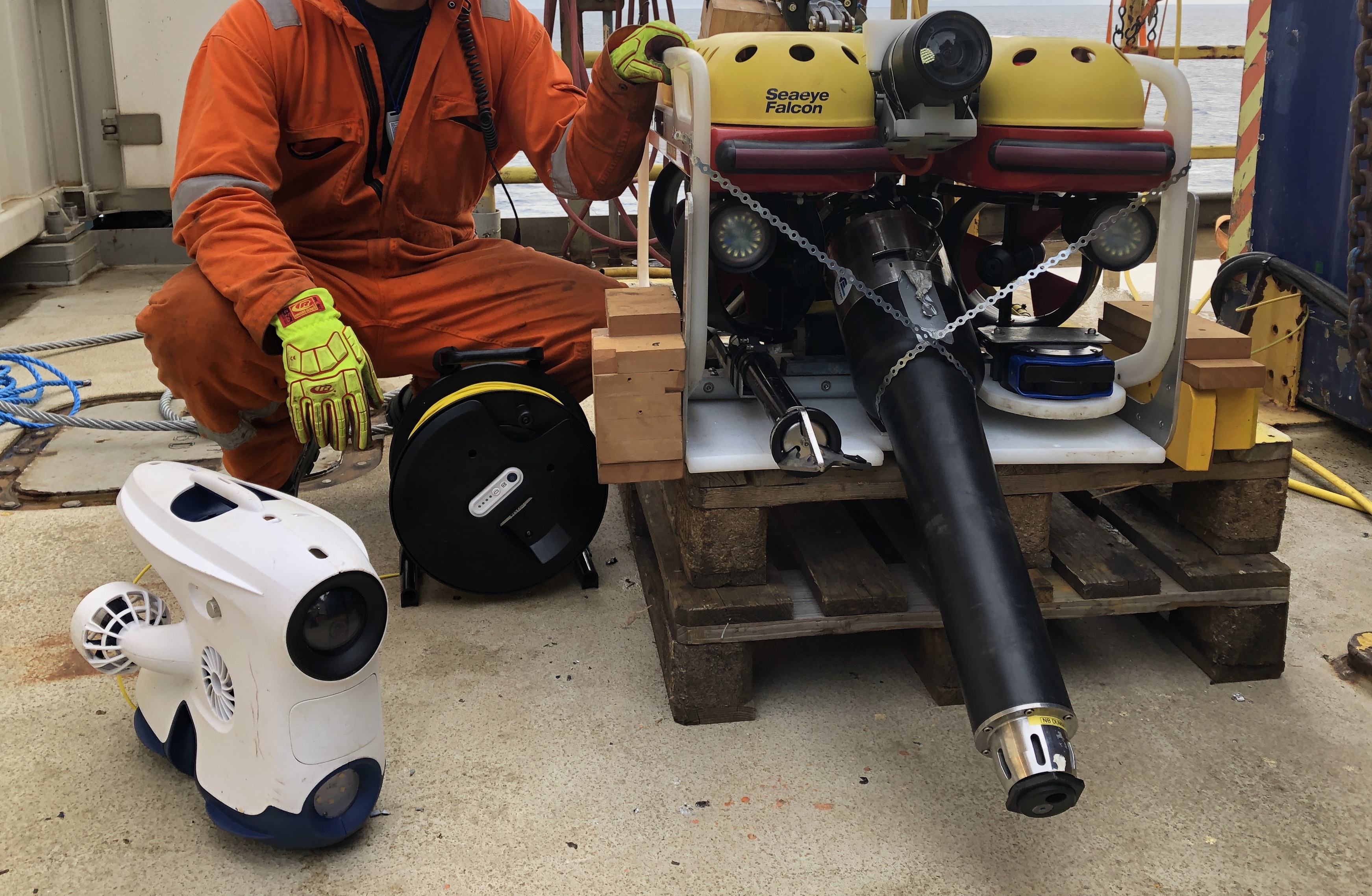 One of the pilots was also interested in testing the Blueye drone and was involved in launching the drone from the rig. After a Work Permit and a Toolbox Talk was conducted, the drone was lowered down to the water. He stood with the controller and was quickly super impressed with the maneuverability and balance of the underwater robot.

This is by far the best mini-ROV I've ever tried, and I'm not just saying it to be nice!
- ROV Pilot for IKM Subsea

Furthermore, he liked the image quality and how little backscatter there was in the image. With the image stabilization enabledc, we got some really good pictures taken of the drill string that was turning around inside the conductor guide at 40 m depth. The driller was also pleased with the image quality of his video stream up in the doghouse, which was routed up via a temporary ethernet cable.

The Blueye drone managed the mission and came all the way to the bottom of Ivar Aasen in the North Sea, although we were still dependent on some functions such as "bubble watch" and PH measurement from the Falcon ROV.

The day after I had left, I received a phone call from the rig, telling me that their ROV had crashed and that it was not possible to get spare parts until over the weekend. Thus, Blueye suddenly became the main ROV on top hole no. 2. The ROV-boys then had the launch rig mounted again and put out Maersk Drilling's own Blueye drone.

Did you get any benefit from the drone? We got to take pictures of the conductor implementation as desired by the customer. It got a good test with launch from the Texas deck in 2 m+ Hs, 0.5 knots current, 110 m water depth and otherwise demanding conditions. Quite impressive even without sonar or positioning equipment.
- ROV Pilot for IKM Subsea 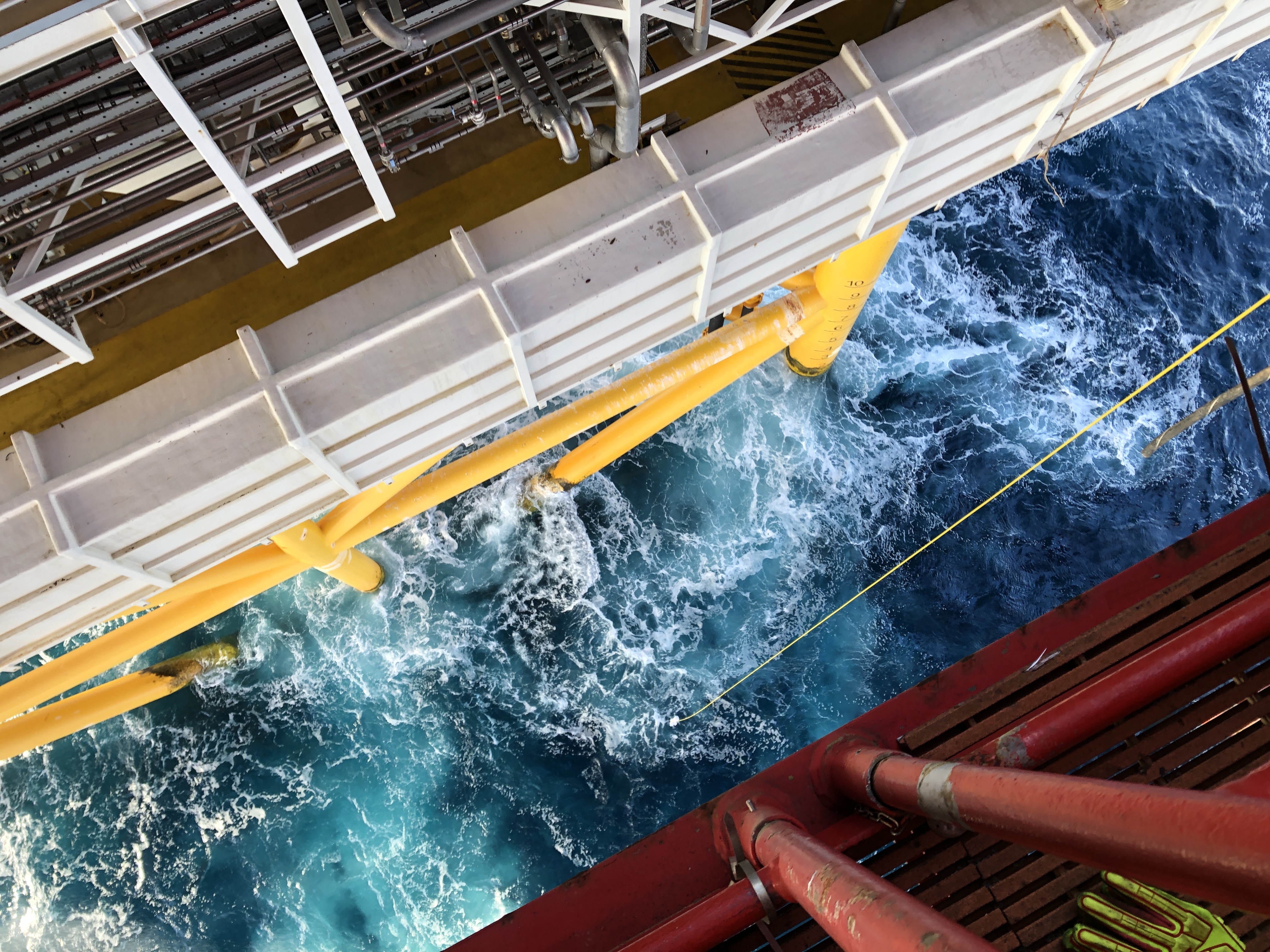 Later, when I returned to the office in Trondheim, I also received good feedback from Hanna in Aker BP:

Blueye drone provided good support on top hole no. 2. Although we did not get to see everything we wanted due to the battery life, we got what we needed to continue the operation.
- Hanna Tronstad, Assistant Drilling Superintendent Aker BP